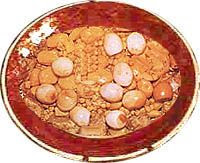 "In the records of the Inquisition, adafina [cholent] was so popular a proof of secret Judaism that one gets the impression that the inquisitors like it even more than the Jews did; and because the clerics spelled out its ingredients for the record, one is thankful to the "Holy Office" for an occasional Jewish recipe." (Yirmiyahu Yovel, The Other Within: The Marranos – Split Identity and Emerging Modernity pg. 130)

Now we know the true reason for the Spanish Inquisition. They tortured former Jews so that they would give up the secret Jewish recipe for cholent, allowing the inquisitors to make it for themselves. It would be a fun project to pull out some of these recipes from the archives and make an Inquisition cholent.
Posted by Izgad at 7:58 AM

The Inquistion, what a show.. the inquisition here we go...