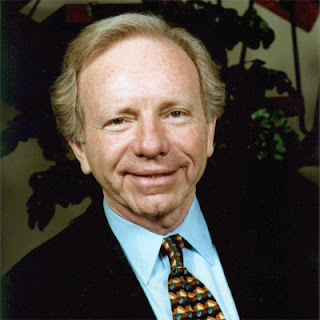 To take a short interlude from my discussion of Aryan Coffee, I ended the most recent piece by comparing, as I have done before, homosexuality to eating pork. They both violate verse in Leviticus. The question becomes to what extent may public officials interfere with homosexuality or the eating of non-kosher animals and, to reverse the issue, to what extent is the public required to grant validity to either of these two types of behavior.

Senator Joseph Lieberman, a former Democratic Vice-Presidential candidate, now the Independent senator from Connecticut, is an Orthodox Jew. He is certainly in his right not to eat pig. I would even go so far as to say that he has the right as a member of the United States Senate to vote to cut government subsidies for pig farming. He is even allowed to "discriminate" in favor of cows, and plausibly even cows being slaughtered in a kosher manner. He does not even have to offer any secular explanations for this. All he has to do is say "I do not like pigs so I am not voting for them." On the contrary, it would be Senator Lieberman's rights being violated if the nation's pig eating rights activists with the aid of a pork loving Supreme Court, ruled that pork is a fundamental right, that any attempt to restrict its eating or to favor other meat was a denial of the very being of pork lovers and, as such Senator Lieberman was constitutionally obligated to grant pigs equally funding as cows. (This is all assuming that you believe that the government is allowed to hand out subsidies and tax cuts to private industries in the first place.)

To take this a step further, imagine if Lieberman were to become President of the United States. I humbly suggest that he would be in his rights to make the White House kosher and ban pork from the premises. The same would go for an official White House Christmas tree and Easter egg hunt. If this is going to be a Jewish White House then we are free to make some new customs. Maybe a White House snatch the afikomen. It would seem that Lieberman would even be able to go so far as to pass a special presidential order banning the other white meat from the premises of all federal buildings, including embassies overseas. This would not be an act of forcing religion on anyone. It would be the eccentric actions of a politician putting his personal stamp on the government he runs. It is no different than President Hayes' first lady, Lemonade Lucy, banned alcohol from the White House. I am not suggesting that Lieberman or any other aspiring Jewish politician engage in such behavior. As a minority in this country, I am content to follow my chosen lifestyle in peace and have no need to see it publically validated. Certainly Lieberman, as a senator or even as president, would not have the right to directly come after private businesses like McDonalds and make them stop serving pork. Also, he would not have the right to stop federal employees from indulging their pork habits in the privacy of their own homes. But that is the crucial difference; private individuals are allowed to use their own private businesses for self-validation. They have no grounds to expect the government to provide this validation. The government has no right to interfere with individuals but otherwise is free to express the eccentricities of officeholders and those who vote them in.


To the best of my knowledge, Senator Lieberman does not have a particularly conservative record when it comes to gay rights and is unlikely to be the one to stand in the breach to stop gay couples from getting their marriage licenses, but would he have the right to? Would it be any different if he voted for a special tax break for heterosexual couples without offering a similar tax break to homosexual couples than if he offered tax breaks for cows and not pigs? People raising pigs, if they were so desperate for a tax break, could, technically, switch to raising cows. Similarly homosexual couples could choose to take up partners of the opposite sex. (I am not suggesting that they should.) Lieberman would still not be able to interfere with the private homosexual activities of federal employees, but they in turn have no right to expect validation from him.
Posted by Izgad at 1:43 PM

A couple of problems with your thesis:

2) While I agree that Lieberman himself does not have to justify his personal views, as a politician his job is to represent the views of his constituents. Presumably he's a a senator because most of the voters in his district share enough of his views but if they all felt strongly enough about something he differed with, he might have to vote against his conscience in favour of his constituents' desires.

3) Lieberman is not Orthodox. He may have a very traditional background, he may keep kosher and Shabbos to an extent but during the 2000 campaign he proved he was not officially Orthodoxy. Whether is was attending a lunch meeting on Tisha B'Av or sharing an aliyah with his daughter at a Reform temple, he proved over and over that while he is sympathetic to Judaism, he isn't prepared to be completely inconvenienced by it.

Since we are not living in a biblical theocracy, we have no ability to punish, just to socially condemn. As such pork and gay sex are in practice at the same level.

What goes on between Lieberman and his constituents is a private matter for them. If the people of Connecticut object to Lieberman’s porkophobic ways they are free to vote him out of office. Maybe the cattle interests in that State think a pig hating Orthodox Jew is the perfect person to represent their interests. The Supreme Court, though, cannot get in the way and tell Lieberman not to discriminate against pig.

I am not saying that Lieberman is a model Orthodox Jew or that he is not willing to make certain compromises when it suits him. He is an Orthodox Jew by virtue of the fact that he is a member of an Orthodox synagogue and actively identifies himself with the Orthodox movement. (Yes one can be a non-observant Orthodox Jew.)

This post is super funny. You could deliver it at a stand up comedy club to great acclaim. I laughed so hard, I almost hurt myself. :-) :-)

And they say historians are boring... ;-)

I think that for Joseph Lieberman to ban pork for religious reasons would be an abuse of power and an establishment of religion, and I would consider such a move politically illegitimate. I might let it slide, because it's not a big deal to me. But as I argued in a previous thread, it would be a quite different matter if eating pork was a religious obligation for some other group. Then Lieberman would be arbitrarily infringing not only on other people's pursuit of happiness, but also on their freedom of religious practice. This is the situation with gay marriage.

Obviously I have no interest in keeping pigs or gay couples out of federal buildings. In the case of gay marriage we are once again playing a societal validation game. If traditional society wishes to thumb their noses at gay couples by making sure that traditional marriages are validated with pieces of paper signed by the government while denying same-sex couples the ability to be validated by a similar piece of paper that is their right. Just because the government gives a tax break for one style of lifestyle choices it does not mean that they have to give tax breaks to another.

Personally I would support the ending of government endorsed marriage. Do whatever you want in your church or synagogue and call it whatever you want. Instead the government would allow tax breaks and hospital privileges for you and one significant other.