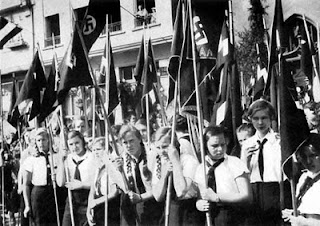 (The Nazi girl's youth group, the BDM, served to corrupt the morals of German girls all around. In addition to indoctrinating adolescent and teenage girls in racism and anti-Semitism, girls were also actively encouraged to get pregnant out of wedlock to produce children for the Reich.)

I do not think it will come as a big shock that, as a believer in civil liberties, I support the right to buy and sell pornography in person and online. I do not personally support pornography, either ideologically or monetarily. Pornography violates my religious beliefs as an Orthodox Jew. As a rationalist, I believe anything that objectifies human beings as sexual objects is a threat to society. I cannot agree with my friend Clarissa that there can be any legitimate exploration of sexuality for its own sake. I would even go so far as to say that this form of behavior, in practice, particularly harms women. I am even willing to grant that the presence of a porno theater in a neighborhood will attract potentially "undesirable" elements and indirectly cause an increase in crime. That being said, I am willing to put myself out in support of the producers and consumers in this industry, despite my personal contempt for such people. This is what it means to support liberty. I am willing to protect the right of anyone to do anything that does not cause direct physical harm to other people without their informed consent. This includes those whom I oppose with all my heart. As a libertarian, I am willing to go even further, in the name of ideological consistency, in this regard to things that regular liberals will usually back down from. I believe in a right to prostitution and drug use without any interference from the federal government. Since I accept the rational validity of engaging in extramarital sexual activity even prostitution, I cannot accept the legitimacy of any laws barring minors from engaging in sexual activity, pornography, and even prostitution.

There is one safety mechanism that I would put into play. I recognize the right of individual cities, acting solely for the material benefit of those living there, to regulate businesses, including the sex trade. Having a house of ill repute next door affects the value of my home and thus crosses the line into my direct physical interest. In contrast to this, I cannot make a plausible case that sinful women in Nevada are causing me direct physical harm through their existence and that the federal government owes it to me to "protect" me from these women. I am not even allowed to raise the issue of zealous patriarchal deities out there that might smite the nation if we allow such ungodly behavior in our midst. Cities and neighborhoods would be able to regulate and even ban the sex trade as long as they are acting in good faith only for the material benefit of its residents. Members of the local government cannot pass such laws out of any desire to protect the morals of residents or out of any personal opposition to the trade. That would violate the rights of the producers and consumers in the sex industry. Personally, despite my libertarianism, I have no desire to live in a neighborhood in which the trade is being practiced and can lobby my local government not to allow such activity. I can tell the producers and consumers to put their faith in the free market and try setting up shop in the next town.

This will likely get me into trouble, but I support the right of individual stores and even individual cities to practice segregation. What if someone wanted to set up an Aryan coffee shop so that middle-class white supremacists can come to relax, sip $4 lattes served by pretty white waitresses and not have to be bothered by the sight of any black or Jewish faces as they discuss the latest in racial theory and Holocaust denial? What is the difference between this and a strip club or even a brothel? Obviously, I am no supporter of racism. I would even go so far as to say that my personal distaste for racism exceeds my distaste for the sex industry and that I have an easier time giving such people the benefit of the doubt than I would for racists. As an Orthodox Jew, I believe that racism is a denial that human beings are all created in the image of God. (I recognize that there are plenty of Orthodox Jews who are racists. There are also plenty of Orthodox Jews looking at dirty magazines.) As a rationalist, I believe that racism denies the power of reason to save all human beings through its grace. Defining human beings by race denies reason as the primary characteristic of human beings. I even believe that racist institutions will attract the "wrong" sort of people and indirectly lead to violence. (If you question my sincerity on this point, I will ask you to keep in mind that there are people who would question my sincerity in opposing various sexual taboos because I will not support laws banning such activity either.)

Hmm...I can go with you as far as drugs and prostitution (which I suspect would be more effectively controlled if merely regulated rather than outlawed). But I'm having a hard time with the segregation issue. I guess I do halfway agree with you, because in some cases segregation can be relatively benign. (A nightclub for Mexicans, for example, might be more an identity-politics/cultural affirmation kind of thing than a racist one. And if one is having recurring problems with the Russian mafia causing trouble in one's establishment, is one unjustified in banning Russians, as one Sacramento Armenian businessowner did?) When segregation is motivated by Aryan-style racism, though, I feel that goes too far. Even worse still are organizations that cater to or indoctrinate young people. I think that government does have a legitimate role in proscribing certain violent or dehumanizing ideologies, especially if they are spreading themselves by preying on the young. This is simply a security issue, in my mind.

What you are suggesting is superfluous. As the law exists now, we are committed to sending in the cops to stop our “kind decent non violent” Aryans from practicing their racist lifestyle in my coffee shop. I am sure you would agree that this is a problem. We already have laws against conspiracy to commit murder. (Yes conspiracy is a physical action that causes direct physical harm.) I cannot urge my friend to murder my neighbor. That does not change when my friend is my child and my neighbor is on my long list of groups of people I think should be murdered.

If we committed ourselves to cracking down on every action that increased the likelihood of violent action there would be little left legal. Men in bars lead to an increased chance of violence. So we should close down bars except for ladies night?

Hi Ben, what about conspiracy to commit assault? Is that a crime? Or how about conspiracy to loot, steal, or vandalize property? If these things are illegal (I honestly don't know), are the laws enforceable? My point is that there are seriously damaging actions short of actual murder. At what point do we draw the line?

As an optimist, I really do want to believe that market forces would be sufficient to keep such racist ideologies under control. But I guess I have a bit of a Hobbesean streak in me, because I can't quite bring myself to have that much faith. Racism is sufficiently virulent and dangerous-- especially when it spreads itself by indoctrinating children-- that I find it unacceptable to leave its suppression up to the invisible hand.

I do not know specifics, but I assume there is such a thing as conspiracy to commit (fill in the blank) felony. I assume there is a crime for driving the getaway car in a bank robbery. I certainly would support such laws. I was just using murder as an example.
Keep in mind that as a civil libertarian with very conservative values I live with the fact that when I make the decision to leave things like porn to the free market I know that I am going to lose. So do I, upon realizing that the free market is not going to give me the god fearing porn free society I would like to live in, decide to grab the ball, declare the game over and go home? Of course in this case deciding game over means the end of the open society and probably lots of bullets. As a civil libertarian I believe that the game of an open society is more important than winning the specific battles.
Agreed, the price of living in an open society is high. You might not want to pay this price. If you don’t, let us be honest and not hypocritical about this. Go and join the vast majority of thinkers through history who have not supported open societies. Go sell your soul to your Hobbesean king and beg him to save you.

Hi Ben, I don't want to live in a completely open society, but let's not pretend this is equivalent to "selling my soul to a Hobbesean king," either. That's just the slippery slope argument in reverse.

We are talking about the ability to do and say whatever you want as long as you do not cause physical harm to others. This is certainly a scary idea, but why does it have you so scared that you would run to the government and have them protect them? Do you trust this government to use this power only against those people you want them to use it against?

I support the free market place of ideas because it serves a useful purpose. I need a system that has my right to live my non-Jesus lifestyle so ingrained into it that it never think about going back on it without undermining the very system. No back door excuses such as hurting people’s feelings and being intolerant can be allowed. Furthermore I believe the free market will deliverer us a better intellectual and social culture. If I sound religious about this it is because I cannot fathom anything you could offer me to get me to back away from it. I am even willing to give up on porn and Aryan coffee.

How can you be a historian and not be scared of racism?

I am very scared. It is one of the reasons why I am not an anarchist and am willing to make the concession to allow there to be any government to begin with. My government makes sure that racism is kept to Aryan coffee and not torching my house.