Scourged: The Price of Having a Character Who is Too Powerful


A few months ago, I used Brandon Sanderson's Second Law, which deals with the importance of non-omnipotent characters, as a means of talking about the Exodus narrative. Here I would like to further explore this with Kevin Hearne's Iron Druid series, one of my favorites over the past few years. It is about a two-thousand year old druid named Atticus O' Sullivan on the run from deities from numerous pantheons. As far as I am concerned (and the evidence of a tournament suggests that there is a large fan base that agrees with me on this), the real star of the series is Atticus' wolfhound side-kick, Oberon. This is in no small part due to Luke Daniels' incredible voice narration. Largely on the basis of this series, Daniels has become one of those narrators that, barring a romance novel, I will read a book regardless of the author just because he narrates it.

I would like to discuss one weakness of the series and its ramifications for its ending in Scourged. Even (and perhaps especially) for a fantasy series, Atticus is simply way too powerful. There is not a single character in the series that completely outclasses him in brute magical strength. Furthermore, he is immortal thanks to a secret mix of herbs a regularly consumes as well as a special relationship with a death goddess, the Morrigan. In addition to moral problems about Atticus' decisions as to with whom he shares his herbs with, for all intents and purposes, Atticus being immortal makes him a god with all the narrative pitfalls that come with it.

For a story to have emotional power, the main characters need to change. A god, by its very nature, cannot change without destroying itself. The reason for this is that part of what makes change possible is confronting real stakes in which something important is at risk.  Gods are beings above the natural order of things including suffering and loss. Because of this, nothing that happens to a god can really have high stakes. Narrative events happening to a god as opposed to a mortal is the difference between playing a friendly game and being in the Hunger Games. Think of the Book of Job. What is a friendly wager between God and the Satan is a blood-soaked tragedy for a human being like Job. We can emotionally invest in a character like Job in part because there is actually something at stake for him. Will he or will he not get justice from God? It might be interesting to tell the story from Satan's perspective as he is playing a truly high stakes game of baiting God. As for God himself, he is fundamentally boring in his utter incomprehensibility.

For a god to be interesting as a lead character, as opposed to serving as a personified force of nature, they have to face change in the form of the destruction of whatever context they made sense in, the true meaning fo death for a God. The classic example of this is Norse mythology where the gods possess a tragic pathos precisely because they are fighting a battle they cannot win; their choices can only end in Ragnorak and their destruction. This is the essence of the Wotan character in Wagner's Ring Cycle. He is a god who is trying to cheat fate through his ability to make laws only to be undone by his own laws. The modern author who best comprehends this ethos is Neil Gaiman. Key to his Sandman series is the fact that Dream cannot avoid change. Ultimately, that means that he needs to die and his only real choice is the circumstance under which that happens. It is not a coincidence that in recent years, Gaiman has turned to directly retelling Norse mythology something that has been an undercurrent in almost everything he has written. What is particularly strange, is that Hearne is clearly a fan of Gaiman's and understands this principle. It is precisely for this reason, that he kills the Morrigan off in middle of the series. That being said, he refuses to apply this same logic to Atticus.

What is ever at stake for Atticus? He is already two-thousand years old. Even his death would simply be his long overdue fate as a human. For the series to work Atticus needed to embrace his godhood by sacrificing himself on the altar of facilitating change to a world that, even if it might be a better one, has no place for his kind of magic. Hearne, though, is too charmed by all of Atticus' power and his joking personality to write the kind of tragedy this character needed.

One never gets the sense that, over his long life as an immortal on the run, Atticus was ever any different from the wise-cracking twenty-something bookstore owner. Note that this would have been fine if Atticus had started the series off as precisely that without any backstory. Once we have trapped Atticus into his two-thousand year old self, it is difficult to plausibly get him to change.

Going back to the very first book, Hearne had the option of killing off Atticus and making the series about Atticus' student, Granuaile. This would have had the advantage of giving Granuaile all of Atticus' challenges even, as a druid in training, she would remain distinctly ungodlike. This would not be any different than having Luke Skywalker or Harry Potter having to solve the problems of Obi-Wan Kenobi and Albus Dumbledore. Oberon would still be in the series and would now have a real purpose beyond comic-relief. In between trying to convince Granuaile to give him more sausages and tell him what a good hound he is, he could cough up some partial bits of wisdom remembered from his time with Atticus. Instead, Atticus is left as the main character of the series, despite the fact that he is too powerful to serve in that capacity. Granuaile is left to serve as Atticus' love-interest despite the fact that their power differential make them uninteresting together. This further wastes an opportunity as Atticus and the Morrigan would have made sense as a couple.

The critical turning point in the series was the third book. Much like Prisoner of Azkaban allowed J. K. Rowling to elevate Potter from a collection of clever jokes about school and mythology to a story with real stakes by having Harry make the mistake of keeping Peter Pettigrew alive with the consequences for the rest of the series, Hammered allowed Atticus to make the mistake that he spent the first two books being maneuvered into, leading an attack on Asgard to kill Thor. Having Atticus take on the consequences of getting one friend killed and causing another to eventually betray him in addition to setting Ragnorak in motion could have elevated the series to another level. Instead, Hearne treats this as an afterthought to training Granuaile and Atticus being his upbeat self despite the fact that this does not fit the story that needs to be told. This is similar to the Star Wars prequels in which George Lucas wanted to tell all kinds of stories except the sci-fi Paradise Lost/Faust sci-fi telling of the origins of Darth Vader that was needed.

The prequels trapped Lucas into telling a story he did not want to tell, the downfall of Anakin Skywalker, causing him to pursue it as an afterthought. Similarly here, Hearne cannot escape the need for the forces of evil, led by Loki. to break out and Atticus having to unit all the various pantheons in a last-ditch effort to save the Earth despite the fact that about the only thing the gods can agree upon is killing Atticus. This essentially is the plot of Scourged and Hearne has been building to it on the side when he has not been distracted by less important things.

The problem with Scouraged is that it has no sense that anything is really at stake. The only urgency here is to wrap the series up so that the author can move on to other things without angering his fan base. There is no sense that the good guys are outgunned and in need of something desperate and creative. On the contrary, one feels that Loki's forces are like the British soldiers of World War I about to cross the Somme after giving the Germans a ten-minute warning with the end of the artillery bombardment to get into position. Obviously, Loki stands about as much chance of winning as a James Bond villain, but the author owes it to the reader to allow for the suspension of disbelief that this is not the case.

Hearne clearly understands this problem that he has written himself into and tries belatedly to inject some consequences. Atticus loses an arm with the tattoos that bind him to the Earth and that serve as the source for most of his power. He ends up betraying Granuaile in order to keep her out of serious danger and she leaves him in the end. The allows for the Morrigan (a death goddess is never truly dead) to appear and offer Atticus the opportunity to join her in death. Atticus turns the offer down even as he acknowledges that there really is no drawback to someone like him choosing death. Even at the end, Hearne loves his super-powerful immortal Irish hippie too much to take him where he needs to go.
Posted by Izgad at 4:18 PM No comments: 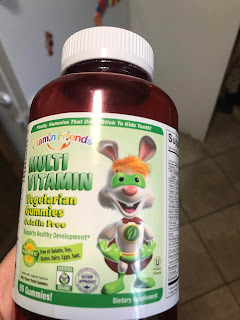 As those readers who are both traditionally observant and parents will surely testify, it is not so easy to get children's vitamins for kids that are kosher. The problem is that most kids vitamins have gelatin in them. So it was good to find Vitamin Friends Multi Vitamin Vegetarian Gummies with an OU. In addition to the OU though, there is an Autism Hope Alliance Autism Approved symbol, presumably due to the fact that in addition to not having gelatin, the gummies do not have gluten either. I guess this group is not made up of autistic warrior daddies fighting to save their children from neurotypicality through gluten diets. I checked the group's website and they openly say that they are the "first non-profit foundation for Autism to emerge from the natural foods industry." So they are not even pretending to be anything but a creation of corporations trying to make money by pushing health fads. This is like if Kellogs had decided to start the OU and its kids' outreach arm, NCSY, themselves in order to convince people to keep kosher by only eating cornflakes. Perhaps Maxwell House should not have stopped at making Haggadahs but should have invented their own Passover Seder ritual complete with four cups of coffee. It is bad enough having to deal with parents silencing their autistic children and forcing junk science down their throats, it turns out that the parents are, in fact, corporate shills. If only we had Big Pharma to support us.