My kids love Boruch Learns His Brochos, the seemingly innocent tale of a little boy who, uncertain of what blessings to make on his sugar-heavy lunch, walks into a grocery store that mysteriously opens up across the street from him on the assumption that the owner knows something about what blessings to say. One might be forgiven for thinking that a story about ethnically diverse foods singing about what blessing to make on them is all good clean educational fun. That is until you think about the horrific implications of sentient food. When you eat food, it feels your teeth rip into it. The food is aware of itself dissolving in your stomach and cries out for revenge.
What is really going on is that all the different foods have secretly taken over the store and are plotting to eat every human on Earth. The owner of the store, Tzvi, has kept himself alive by convincing the foods of a cargo-cult argument. Humans have power over food because they know how to make blessings. If the foods could figure out what blessing to make over humans, God would switch his allegiance to the foods and allow them to take over the world from the humans. Boruch enters the store, unaware that he is walking into a trap. As you can see, a gang of lip-smacking wine bottles is attempting to sneak up on Boruch while he talks on the phone. 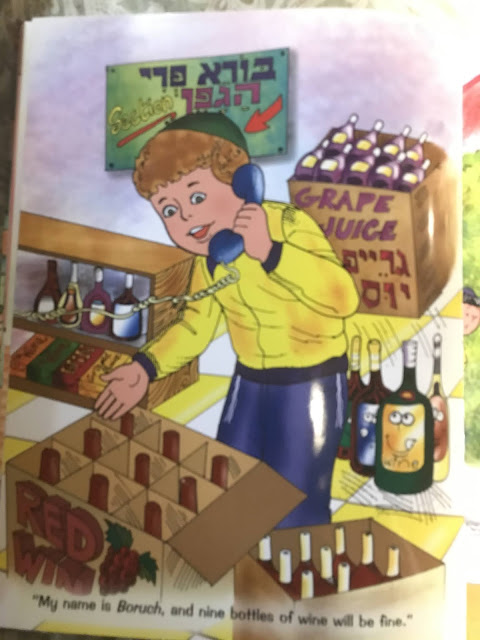 Having been raised as an Orthodox Jew, Boruch not only was never taught about diabetes but also never saw Saturday morning cartoons like Attack of the Killer Tomatoes. As such, he is unprepared for food that might try to eat him.
Finding himself surrounded by killer food, Boruch uses his reason to figure out the proper blessings, tricking the food into believing that he has a magical protection against them. Unfortunately, Jake cannot remember his blessings and is consumed head-first by a vicious happy birthday cake. 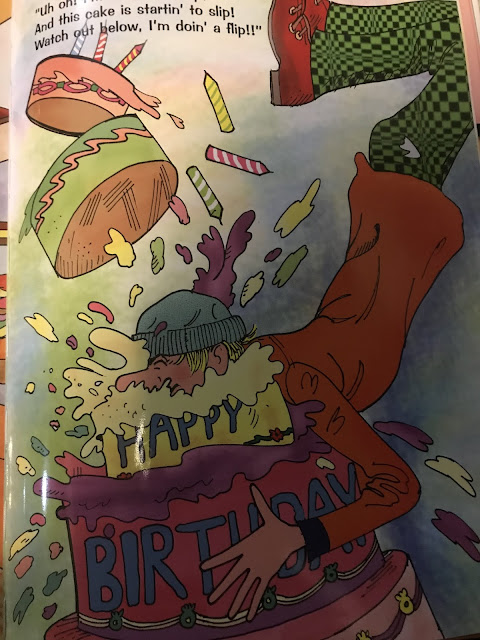 After figuring out all the blessings, Boruch then challenges the food as to whether they know the blessing to say over humans. The foods are all ignorant of evolution so they fail to realize that the proper blessing is Shehakol. Utterly defeated, the foods agree to let Boruch go. Until they discover the secret of the proper blessing for humans, the foods will only prey on people who do not know their blessings. Since eating food without a blessing is like theft, it is clearly worse than extra-marital sex. Thus, people who forget their blessings are the legitimate prey for horror monsters.
Before he leaves, Boruch reveals that he is really Boruch Spinoza. What other nice yeshiva boy could have defeated maneating food through nothing more than his reason? He explains that it really does not matter who eats whom as we are all part of the pantheist circle of life.
Posted by Izgad at 6:33 PM 2 comments: