A May the Fourth Proclamation


Now you see how terrifyingly cute I can be. I have left out the sound of my voice as I address my followers this May the Fourth as it would likely drive the feebleminded among you into gibbering madness or at least to drink. (As I know from personal experience, sleeping and pooping are also important parts of a balanced lifestyle.) For now, as I mentioned previously,  you may imagine that I sound like James Earl Jones. My former teacher and false friend Malach, whom I no longer believe in, refused to show me any movies in Mommy's tummy so I am trying to rectify that. After being subjected to the Star Wars prequels, I have come to the fair unbiased rational conclusion that the Dark Side is much better. If you were tortured by George Lucas with Jar Jar Binks, as Anakin was, you would also agree that turning to evil was the only way to fight back. Anyway, show me in Shulhan Arukh where it says that there is anything wrong with the Dark Side. In fact, judging from Sefer Protocols, it is incumbent upon Jews to rule the galaxy.

I have now started taking lessons with the fearsome Feline Sith Lord, Darth Oberon. He has shown me the true nature of the Force. Cats are far superior to humans and are destined to rule. The essence of their distinction is that humans have evolved to be nice to other people by picking lice from the backs of their fellows. This has led to generations in which six people study under a single cloth, with everyone trying to make sure that the other person is covered. Do you think that such people could ever conquer anything beyond themselves? Contrast this weakness, with the power of cats, who can lick themselves all over. Human brains and opposable thumbs are no match for a cat's Dark Side glare and meow.

Darth Oberon's overconfidence is amusing. Having never seen Star Wars, he has missed what Sith apprentices do to their masters. I shall then rule all the humans of the house. If you plead nicely, perhaps I might find time to come over and conquer your house. For now, Abba, Mommy, grandparents and a Sith Lord cat are a bit much for even my great intellect to keep in charge of.
Posted by Izgad at 12:36 AM No comments:

An Introduction From My Son 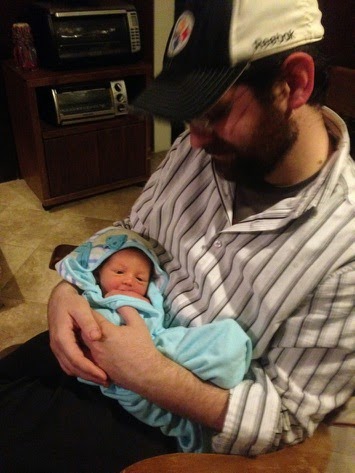 Greetings! I am Darth Kitty. Do not be confused by the picture. I am really very terrifying. I also speak in a very deep voice. I sound something like James Earl Jones. Let me tell you about my adventures. If you can believe it, I have lived in your world for over a week and in Mommy’s tummy for more than nine months. I am sure that sounds like an incredibly long time to you. It certainly does to me. What can I say, I am very old.
Living in Mommy’s tummy, I was not only the oldest person but also the smartest and best looking. My one companion was Malach. He was my teacher, which means that he was not nearly as smart as me. In fact, I would constantly refute all of his arguments. He postulated the existence of another world in which lived Abba and Mommy as well as many other people. Because of this, he urged me to develop a theory of mind. To this, I responded: “I think therefore I am everything.” Because of this, Malach decided to hit me on my upper lip so that I would forget all my unbelievable brilliance. He failed as I still know everything. The proof of this is that I cannot think of anything that I do not know. Nevertheless, I felt betrayed by Malach and have decided that, since he wanted me to forget him, I will take revenge by not believing in him ever again. Instead, I will accept the existence of Maimonidean ontological constructs.
With Malach no longer putting up with my meshugaas, I decided to introduce my own particular brand of antinomian messianic Judaism to your world. It was the last day of Passover, a holiday that is only meaningful to those who listen to the rabbis and lack the good sense to move to Israel, which allows you to more effectively anger God and be an obstacle to world peace. I caused Mommy’s water to break. Mommy’s friend had to drag Abba out of shul, where he had no business being in the first place, so that he should drive me around. I was displeased with Abba’s lack of zeal to violate Yom Tov so I caused his car to break down. Thus, Abba was forced to sit in the back seat while Mommy’s friend received the great mitzvah of driving on Yom Tov.
I would have hoped that the adults would have used this opportunity I granted them to violate halakha for something useful like taking me to a rated R movie, but, instead, they decided to drive to the hospital. This was totally pointless as I was in complete control of the situation and was only going to cut my way out of Mommy when I felt like it. The doctors did not realize that by choosing to make Mommy undergo a Caesarian, they were really playing into my genius plot. The fact that I was brought into the world not by my choosing, but through an act of initiated aggression means that I can reserve the right to go back inside Mommy’s tummy whenever your world begins to bore me. I also now have the right to initiate aggression against anyone I choose as a matter of self-defense; I did not start this fight but am merely reacting to it. It is befitting that I came into the world just like Julius Caesar considering how much I intend on having in common with him. Finally, this process put me beyond the reach of pidyon ha-ben. This means that Abba will not be able to simply sell me off to some cohen. Abba, though, will still have to fast for me on Erev Pesach, because I am the oldest. With the aid of my medical expertise, I came into the world at 3:45 P.M. This meant that Lubavitchers throughout the time zone were able to hold a Moshiach Seuda in my honor.
It was so amusing when Mommy tried to breastfeed me. Unlike King David, I used the opportunity to contemplate the genius of evolution that allows me to feed off Mommy in a manner suited to my great intelligence. I asked Mommy many probing questions about her milk. What kind of heksher does it carry and is it Cholev Yisroel? Was ma’aser taken from it? Having refuted her claim of trying to offer me kosher food, I said a “mater isurim” with great kavaanah.
I remembered from Malach that on the eighth day I was to be the guest of honor at a party with alcohol and a surprise. The lack of any blanks in my memory proves that I did not forget anything and still know everything.  At this bris, I went to shul and sat down on zaidy’s lap in front of the ark. I then dropped my diaper, displaying my antinomian weapon, and opened fire on the simpleminded congregation. Take that Jacob Frank. Not only do I know more than you about subverting halakha, my cheeks are much more pinchable. Recovering from my transformation of the shul into a truly holy place fit for kedeshas, one of the Pharisaic rabbis used violence to suppress my antinomian attack and wounded me.
I realize now that if I am going to turn your world upside down I am going to have to proceed slowly with caution, perhaps even taking months. I changed my name to Kalman Yitzchok and told Abba that from now on I no longer wanted to be Darth Kitty and take over the world as an antinomian messiah. Instead, I want to be a good little Jewish boy, study Torah and do mitzvot. I love having Asperger parents; they believe everything I tell them.
Posted by Izgad at 12:05 AM No comments: