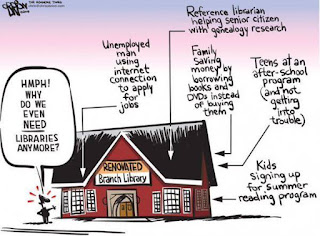 It is great every once in a while to run into a situation where the libertarian and conservatives sides of my brain come together in perfect synchronicity, leaving no conflict between the two. As a libertarian, I would point out that this is the inevitable conclusion of the obscenity known as positive liberty. If you are going to claim that people have a right to libraries then you must admit that people have a right to computers and then decent internet connections. Just in case you were fooled into believing that all of these things were to be used so people could read Adam Smith and, as such, were necessary to uphold a liberal democratic society and stop us from degenerating into the darkest savagery of the Scottish Highlands, tax-payer funded government libraries are for porn.

As a conservative, I take it very personally that this patron and the librarian have entered into a conspiracy to rob me at gunpoint and violate my religious convictions by making me support the distribution of pornography. (And I thought I would only have to bake a gay marriage cake.)

Are You a Heretic or a Psychopath? Towards a Halakhic Morality 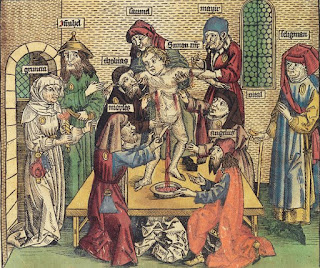 Imagine that you are secretly taken to a dingy cellar where, surrounded by cloaked figures, you find a bound and gagged child. Puzzled, you ask your escort for an explanation and are told that this child, personally innocent of all wrongdoing, is a genetic Amalekite. He has been chosen because of his great purity to be the first Amalekite, since possibly biblical times, to be killed in fulfillment of the commandment to wipe out Amalek. If they simply took a Nazi or an Arab terrorist Amalekite, people might think that this had something to do with justice. By choosing an innocent little boy, they are demonstrating that they are only motivated by a desire to fulfill God's will, the only innate good in the entire world. Any attempt to be moral is really sowing the seeds of heresy; it implies that you have personal values and think that they can trump the word of God. Only by committing the most profoundly immoral act possible in God's name can someone hope to save himself from this trap. To be clear, this Amalekite killing has been organized by top Torah scholars and all legal and pragmatic issues have been dealt with. They hand you a document signed by leading sages in support of carrying out this "mitzvah" as well as a declaration from the government promising to not interfere with this "free exercise of religion" or punish anyone afterward.

I, for one, would never agree to such a thing; I would even try to stop them. The interesting question, though, becomes why I would save the Amalekite. I could easily defend this decision on Jewish grounds. We are both the children of Abraham, whose tent was open to everyone and challenged God to spare Sodom. Rather than hunting Amaelites, we should pray to God to have mercy even upon Amalekites. Even if Jacob was right to steal the blessings from Esau, the rabbis teach us that Esau's tears have harmed us through the generations. Should we risk the tears of the boy's Amalekite mother when he does not come home? Moses looked into the future before he killed the Egyptian to make sure that no one righteous would come from him. Do we have a prophet to tell us that no one good will come from the Amalekite? Moses told God to either forgive the Jewish people or "erase" him from his book. Part of our job as the chosen people is to tell God that if he wants us to be serial killers than we do not want his people. Let God find some other group to do his dirty work.

Some of these arguments might have more merit than others and I am sure readers can come up with other justifications. But let us be honest here, these are justifications. The real reason why I would not murder the Amalekite boy is that, underneath my Orthodox exterior, I really am a follower of the "Benzion Noam Chinn religion." This religion has a lot in common with Judaism. So, as the Benzion Noam Chinn religion only has one adherent, it made sense for me to formally practice Judaism in order to have a community. When there is a contradiction between the two, I will attempt to cover up the problem through intellectual creativity. It should be understood though that this is all really a dodge and if I ever run out of solutions I will simply reject Judaism rather than be untrue to my Benzion Noam Chinn religion.

It is common to hear rabbis declare that all of their decisions are based on halakah and they never make recourse to any outside sources, certainly not to anything non-Jewish. Such people are either intellectual imbeciles, who have never considered the implications of taking such a doctrine seriously, or they are dangerous psychopaths, ready to murder innocent children when their "unbiased" reading of a text comes up kill. Such people are a danger to society in general and the Jewish people in particular.
Posted by Izgad at 5:15 PM No comments: 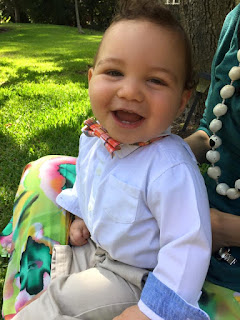 This is Kalman Isaac and my Abba has been introducing me to American politics. Like many of you, I have been shocked, horrified and disgusted by the rise of Donald Trump to become the leading candidate in the Republican primaries. Note that this shock, horror and disgust is with the Republican party and not with Trump, who is simply beneath contempt. In this time of crisis, there is only one thing that can save the Republican party from Trump; I place my name forward as the eighteenth candidate for the Republican nomination for president. For any of you worried about the fact that I will not even be thirty-five months old by January 2017, elections should be about maturity and I possess more of it than a number of candidates. More importantly, I can defeat Trump on his terms, offering personality over substance. Understand that every time a reporter asks an obvious question about something that, in a rational world, should preclude Trump from the nomination, he simply plays into Trump's hands, turning Trump's weaknesses into strengths. Trump is Trump and anyone who tries to use logic against him misses the point and increases Trump's appeal. I can out Trump Trump, turning his strengths back into the weaknesses they should be.

Take a look at my beautiful head full of curly hair. No need to fear that my hair will fall on some ambassador. Unlike the tower sitting on top of Trump, my hair is all natural and serves as a metaphor for my handling of the economy. My fellow Americans; many of you are out of work and going bald. A year ago, I had almost no hair. If I became president, the economy would grow like my hair, saving millions from their dependence on Rogaine.

While Trump denounces illegal immigrants, I openly identify myself as one. I used to live in Tummy, but snuck into this country without asking permission from a single government bureaucrat. It would have been useless to build a wall as I would have found a way to tunnel in. Voters should exam my record as the democratically elected dictator of Tummy; I left Tummy with a surplus of pee from the time I first took over.

Unlike Trump, I know that the way for Republicans to win women voters is not by insulting them and resorting to cheap stereotypes. I am a total expert on manipulating women. I just need to smile and clap and they fall right in line to do my bidding.

Speaking of women, my lack of family values is not going to cause a scandal. On the contrary, it will help me because I will be so upfront and honest about it. America, are you ready for this? I am pretty certain that there are pictures of me naked floating around the internet. If reporters cannot get enough of my wee-wee, I will gladly send them more images of it. I live with a woman, who is not my wife and we have a deeply intimate relationship. This woman is married to another man, who is totally accepting of our relationship. (I am still working on tolerating him being married to my woman and do not understand what she sees in him.)

When I debate Trump, I will open up by speaking using coherent syllables. Then, on national TV, I am going to throw down the trap challenge to change my diaper. If he refuses it will show that he does not understand the concerns of working families. If he tries to change my diaper, I will have totally shown my dominance over him and that I am really the much classier fellow. Also, I intend to pee right in his face. Afterward, I will call up my woman and her husband to the stage. Social conservatives will go wild at the sight of my totally unchristian lifestyle, particularly when I show them my tushy. What is Trump going to do, pull down his pants? He will have no choice, but acknowledge that I should be the Republican nominee to represent their supreme values of tushiness and scandalous family lives.