My summer schedule for tutoring is somewhat lighter than during the year as a number of my regular students are away. Since my wife is also off for part of the summer, we took the opportunity to visit my parents in Silver Spring, MD for a week so Kalman could get some extra grandparent love. Flipping through an old family album, I found a picture of my father at an Israel event back when he was a rabbi in Columbus, OH. Speaking at the dais is a young Ohio congressman, who is much better looking than a certain Ohio governor now running for president. 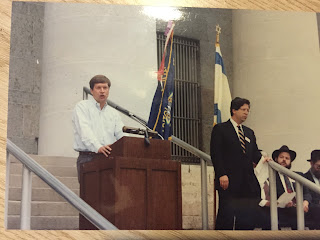 This photo is a key piece of evidence linking the Chinn family to John Kasich as part of a vast Zionist conspiracy. I need to hire Umberto Eco to hash out the details to this an engrossing and sophisticated work of fiction.
Posted by Izgad at 6:29 PM No comments:

Learning to Walk: What Kalman Has Taught Me About Evolution 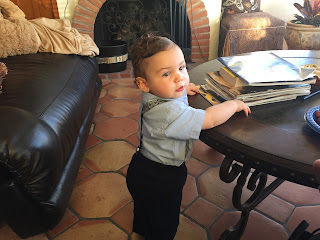 While I had previously used my son, Kalman, to make a joke about evolution, in truth, watching him every day has offered me a greater appreciation for how evolution works. One of the greatest challenges to evolution is how organs can evolve to serve different purposes by passing through intermediary stages. For example, how can a hand evolve into a wing when any species would have needed to spend millions of years without possessing either a fully functional hand or a wing? For evolution to work, every intermediary stage needs to offer its own advantage that allows the species to successfully reproduce.

Learning to walk is a complicated process. People who do not live with babies might think that a baby simply starts crawling one day and then starts walking, but there are many more steps. First, the baby learns to turn himself over onto his back; then he flips himself from his back to his front. Next, comes rolling and finally crawling. To learn to walk, a baby first starts pulling himself up using walls and other objects. Next he starts to use these supports to hold onto while he waddles around. Finally, he drops the supports and becomes a fully functional bipedal being.

As with species evolution, a baby develops into a walker because each intermediary step offers something beneficial to the baby and offers a means to reach the next step. Flipping himself onto his back did not allow Kalman to move from place to place. On the contrary, it left him stranded on his back like a turtle lying on his shell. That being said, turning himself onto his back allowed Kalman to move to a position of great comfort, from which he could make greater use of his hands to grab things. Flipping himself onto his back strengthened his muscles so that he learned to also turn himself over from his back to his front. This too did not allow him to crawl, but merely to roll over. Such motion is slow and does not lend itself to easily calculated movement. Nevertheless, it made it possible for Kalman to grab nearby objects and helped him develop the thigh, stomach and arm muscles to crawl. Crawling was an obvious benefit for Kalman, giving him access to the entire house and forcing his parents to seriously contemplate the meaning of "childproof." (Kalman, as the sort of ingenuous child that evolution has traditionally selected against, had no trouble outsmarting me in thinking of ways to render objects harmful.)

Crawling is such a wonderful thing that it almost becomes a trap. It is hard to come up with an easily achievable next step that offers an overwhelming advantage. Why not remain a crawler forever?
While crawling allows Kalman to cover the entire house, it does not allow him to reach objects more than a few inches off the ground. He, therefore, learned to pull himself up against the legs of short tables to grab whatever is on top. (Kalman is very keen to test the theory of gravity to make sure it constantly works.) Hoisting himself up a pants leg also allows Kalman to remind lazy parents that if they only performed their duty, he would not need to waste his time learning to move in the first place. Crawling has another major weakness in that it tends to require both the use of feet and hands. Kalman has, therefore, worked steadfastly on learning to crawl while using one of his hands to hold a toy or blanket. He has even gotten pretty good at carrying objects while crawling up stairs.

One day soon, Kalman is going to put his ever strengthening leg muscles to use in solving both challenges. He will simply grab something from a table and walk away with it on his own two feet. Once this great feat of evolution is achieved, who knows what might come next? Before too long, Kalman might start painting pictures of kitty, develop fire to roast the kitty, religion to explain why all of this will help appease an angry deity, and the selling of options just in case this deity's wrath is aroused.