Teaching the Story of King David and Bathsheba: How to Groom Children for Abuse


Recently, during a study session with a student, I gave him a list of my five most disturbing stories in the Bible. I ranked the story of King David and Bathsheba as number three. For those unfamiliar with the story, King David has an affair with Bathsheba and then orders her husband, Uriah, killed off in battle in order to cover up the fact that he got her pregnant. The prophet Nathan rebukes David, who repents. Then, in the most troubling part of the story, God chooses to kill the baby, the most innocent person in this whole sordid incident, rather than killing David like he deserves (Samuel II 11-12).

In Haredi schools, the standard way to handle this story is to refer to the Talmud, which states that anyone who thinks that David sinned is mistaken. The reason for this is that soldiers traditionally divorced their wives before going to battle in case they disappeared so Bathsheba was technically single. She went to the mikvah so she was ritually pure. Uriah was liable to the death penalty because he placed Joab's name before David's. This line of thinking is used to buttress the notion that the biblical heroes were totally righteous. In essence, Haredim want to turn the Bible into the hagiographic biographies published by Artscroll. I can testify from my own experience as a student and from speaking to the kids I tutor, that this kind of education is spiritually destructive.

It occurred to me that there is a productive way to teach about David and Bathsheba, using the Talmud to make the opposite point. Yes, David did not sin and there are two things that you should learn from this. First, if you are a clever enough Torah scholar you could find a justification for anything, even adultery, and murder. To all my married female readers, if we think hard and creatively enough, we can find a way to invalidate your marriages. (The Catholics have gotten really good at this.) If we scour the corpus of Jewish mysticism we can even find reasons why it is a mitzvah to sleep with me. Clearly, it is not Pharisaic legalism that will keep me faithful to my beloved Miriam, but personal integrity. As my teacher, R. Aryeh Klapper likes to say: "The great secret of rabbinic Judaism is that you can justify anything on halakhic grounds. It is important that this remains a secret because the moment people realize this it will be the end of rabbinic Judaism." Ultimately, what stops us from declaring ham and orgies kosher is a loyalty to Judaism as a concept and a sense of what Judaism needs in order to survive.

This leads to my second point. David did not sin, but he deserved to die. We can accept every word of the Talmud's defense and it does not change Nathan's powerful denunciation of David one iota. On the contrary, Nathan's words gain strength as we are forced to reckon with the enormity of David's "wrongdoing" without recourse to simple sins such as adultery and murder. Imagine if we caught the world's greatest Torah scholar in a brothel. We drag him in front of Agudah's Council of Torah Sages to answer the charges against him. Because he is such a great Torah scholar, he might refute anyone who claims that he sinned. For example, the Torah upholds the world and is literally the equivalent of serving in the army. Thus, the continued studies of such a great Torah scholar are literally a matter of life and death. Thus, he must literally do "anything" to increase his Torah knowledge and it is a great mitzvah for any woman (as well as any man if that is what is called for) to aid him in any way they can. Obviously, in a time of such national emergency, things that look like sexual immorality are the acts of greatest holiness. It is people who fail to appreciate the true importance of Torah who are the real sinners. Does accepting his arguments redeem this man and allow him to return to his former position of respect in the community? No, the fact that he is able to defend himself so ably makes his actions all the worse. Now, he is no longer simply a tragic sinner, who could not control himself but a threat to the survival of Judaism itself. If his defense gets out, it will bring down Judaism in a way that a fallen Torah scholar never could. Thus, we would have no choice but to kill him.

I am frightened of the implications of allowing teachers to claim that what David did was ok and that God was only judging David very harshly because he was such a righteous man and he should not have done something that even looked improper. (Note that telling kids that this was anything less than a supremely terrible deed is saying that it was ok). We are teaching children that it is possible for something that looks like a great sin to be basically ok if it involves a "holy" person. Recent years have offered plenty of evidence that my Torah scholar in a brothel scenario is not a silly hypothetical. Whether consciously or not (it hardly matters) teachers are grooming students to become the victims of such men.

The problem of predators in our community is not simply a matter of a few bad apples but cuts at the heart of our educational system. I salute organizations like Project Y.E.S. and books like Let's Stay Safe for their efforts to bring about meaningful change.

Introducing the All New Kindle Taevah 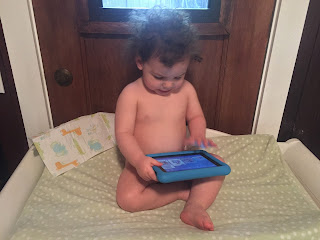 Just in time for Elul and back to yeshiva sales, Amazon introduces their new Kindle Taevah. In a press conference, Jeff Bezos explained to  befuddled reporters trying pronounce the name that the Taevah was inspired by Numbers 11:

I was looking for something to come after the Fire. I was reading the Bible and saw that, after God sent down the Fire, the Children of Israel got Taevahs. Along with the Taevah, God also provided really killer customer service after the Israelites criticized their smorgasbord options.

As demonstrated by a generations of Republican presidential candidates, Richard III and Shylock, being near a bible makes a person really godly so you should always buy what they are selling.

To demonstrate the Taevah's features, Bezos brought out his spiritual consultant and chief product tester, two year old child prodigy Kalman Yitzchok Chinn. Thanks to the Taevah, Kalman has already learned his letters and numbers while simultaneously convincing Brisk that its anti-television policy was completely outdated in the twenty-first century.

Readers will be quickly entranced by the Taevah's hypnotic screen. When starting the device, users will be able to choose from a selection of the most traif sandwiches on the internet as backgrounds. Order now and the Taevah will come with a special case that makes it unbreakable by rebbes even if they throw it out the third story of a yeshivah building. For $50, users can add special mussar canceling headphones.

Initially sales were sluggish as shoppers were told that naked Kalman was not for sale. Sales of the Taevah, though, skyrocketed once the gedolim produced a dance video ad to express how enamored they were with the product itself even as they acknowledged that not having Kalman's tushy was a major disappointment.