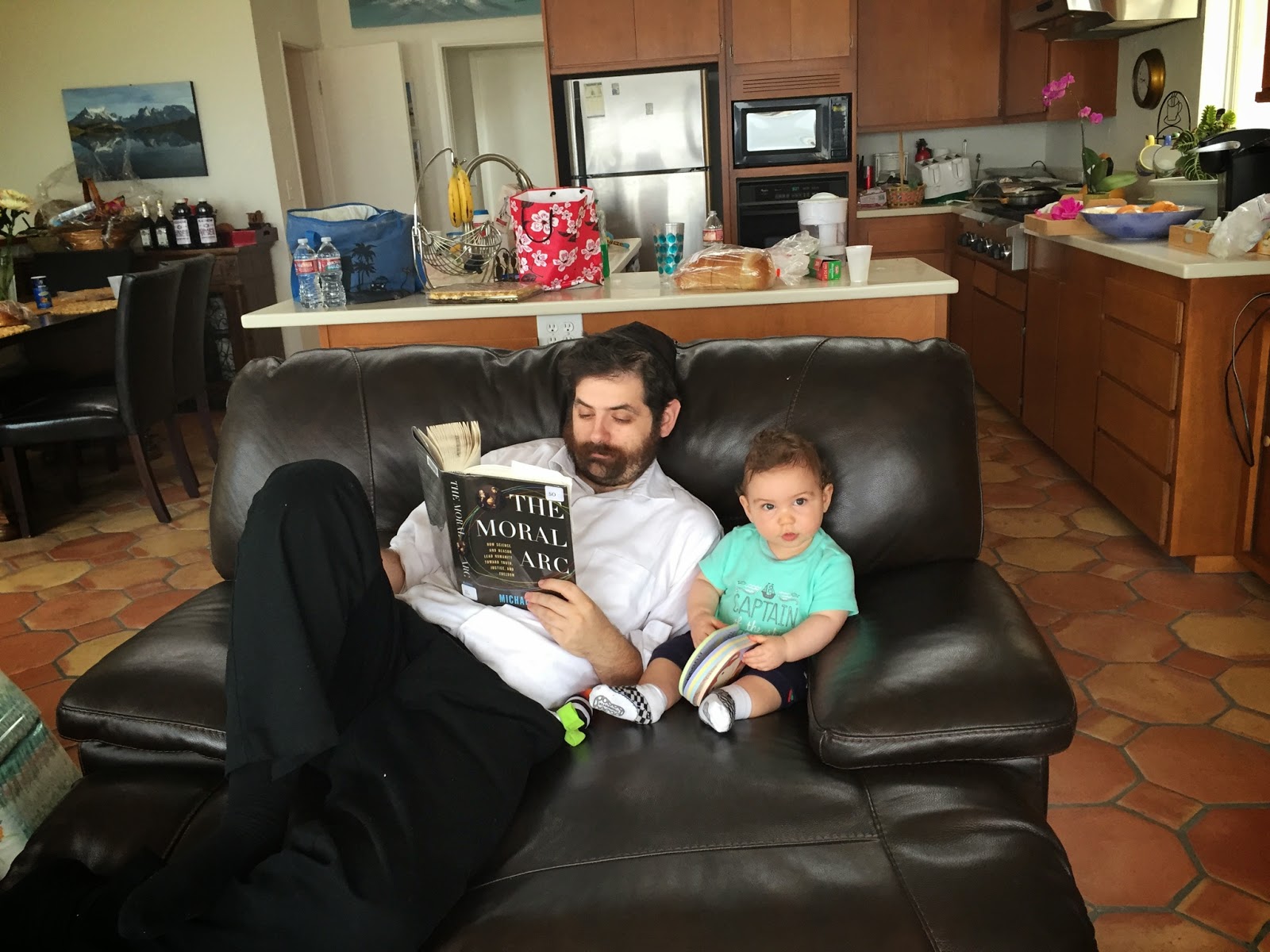 (Kalman Isaac's taste in reading is far more sophisticated than his Abba's.)

Michael Shermer's new book The Moral Arc: How Science and Reason Lead Humanity toward Truth, Justice, and Freedom is certainly a worthwhile read. He offers a more generalized and accessible version of the argument made by Stephen Pinker, in his Better Angels of Our Nature, that there is a connection between the type of abstract thinking necessary for science and for ethics. One needs, though, to get past the laughably bad chapter on slavery where he tries to minimize the role played by Evangelical Christianity in the abolitionist movements on both sides of the Atlantic. For those unfamiliar with the issue, I suggest you start by reading Uncle Tom's Cabin (probably the most successful piece of anti-slavery literature ever written) and try separating Harriet Beecher Stowe's views on slavery from her Christianity. To be fair to Shermer, he generally avoids the simplistic polemic of "religion bad, science good."

On his blog, Shermer has a debate with Marc Hauser about whether science can directly offer proof for moral claims. Shermer is in a difficult position because, while he is not about to commit intellectual suicide by questioning David Hume's classic distinction between is and ought, his claims are interesting proportionally to how close he gets to that line. Much of his argument depends not only on a willingness to accept the advancement of intelligent life as an axiomatic goal, but also the equation of ethics with utilitarianism. This has the advantage of placing ethical questions within the sort of territory that science is fairly well equipped to handle, physical well-being. For example, it is better to save five people from being run over by a trolley even if it means letting one person die and it does not matter if that death is caused by a switch or by pushing a fat man in front of the trolley. For the purpose of the physical world, as shown by science, it is irrelevant whether something was caused by your hand or not so we should not concern with such an issue. Shermer also discusses Jonathan Haidt's moral categories of liberty, harm, fairness, loyalty, authority, and purity. Shermer argues that science has led to more people valuing the "liberal" values over the "conservative" later three. The former directly leads to the improved physical well-being of individuals.

I have been teaching formal ethics for the past several months to some of my teenage students. They instinctively get utilitarianism. I have needed to challenge them to consider the possibility that straight utilitarianism might lead to some highly tone-deaf morality for which they might need to take either Aristotle or Kant into account. This makes me skeptical of seeing the embrace of utilitarianism, whether or not it is a good thing, as a sign of progress in mankind's march to greater moral sophistication.

As a libertarian, I am the sort of person who, as Haidt points out, turns liberty into a trump card that reduces the other values into irrelevancy by comparison. It struck me that it might be possible to construct an experiment to prove libertarianism. Now before anyone gets excited, all I am seeking to prove is that the vast majority of people, including those who denounce libertarianism, really are libertarians in their moral philosophy when it really counts. Now the moral value of liberty is really the non-aggression principle. I refuse to cause physical harm to other people unless they are planning to cause me physical harm as I have no interest in endangering myself by giving that person or a third party a motive for causing me harm. Am I really part of a small fringe minority in believing this? I strongly suspect otherwise.

Imagine the following thought experiment. There is a large group of people. Each one of them has a device attached to them that can give them an instantly lethal electric shock. Everyone also has a smartphone app with the names of every other member of the group. Each person has the option of pushing a button and killing any member of the group they choose. The only drawback is that all the surviving members will be immediately informed of that decision and it is likely that some of them will retaliate in kind. Under such circumstances, what sort of rules will the group create? Will people insist on creating a group-wide school system or health care plan, demanding that everyone pay for it, knowing full well that people might "strongly object?" If a person refuses to comply, who will be willing to push the button and make an example of what happens to those who defy the group?

I doubt we will ever be in a position to try this version of the experiment. If you think about it, though, the danger the group members would be, in theory at least, no greater than the danger every one of us faces on a daily basis. There are 7 billion people in the world and almost all of them are physically capable of killing you if they really wanted to and there is little you can do to stop them. Perhaps we could do the experiment with non-lethal shocks. Alternatively, we could do a reality TV game in which each participant can send off any other participant. Survivors at the end each get a large sum of money. It does not matter how many people are still in the game at the end; it might be that everyone wins. Before they go on the show, contestants would be taped talking about their political beliefs on a wide variety of issues. During the game, contestants will have to engage in group discussions about politics. These will be used as the basis for setting up group rules. For example, contestants will be able to vote on whether they will receive access to things like meat, pornography, and alcohol. The side that loses will have the option of eliminating enough of their opponents so they will form the new majority and change the rules to suit their taste. Under such circumstances, would anyone be so foolish as to vote for prohibitionist policies, antagonizing those whose pursuit of happiness they are interfering with and putting a target on their own foreheads? Clips of participants' pre-game political views will be played to create maximum embarrassment and conflict. It should prove quite entertaining to watch an Evangelical Christian having to explain his opposition to gay marriage to a homosexual, who has the power to send him home, costing him the prize money. Will he agree to turn around and, when voting on conjugal visits, agree to include gay spouses? It is the possibility of backtracking that is important here. If people start sounding very libertarian on the show, in contrast to their expressed politics in their real lives, then it would show that people really are libertarians when something real is on the line. It would be particularly interesting to see if contestants, who have never heard of libertarianism, find themselves working out libertarian principles on their own.

The reason that most people are not libertarians in their daily political lives is that government acts as a shield so that they do not comprehend the violence of their political actions. Since government possesses overwhelming force, people are unlikely to openly violate the law, giving the impression of widespread consent even though that consent is no more valid than any other agreement made at gunpoint. Furthermore, since government agents are the ones engaged in the physical act of violence, citizens are able to duck moral responsibility instead of recognizing that they are also participants in violence. If you find it morally objectionable to personally cause someone physical harm in the pursuit of an agenda, then it should be equally objectionable to use the third party violence committed by the government in pursuit of that same agenda. As with all untried experiments, I really have no idea what would actually happen if we tried it. I expect that there would be surprises along the way and we will all learn something about political morality.