I finally got around to reading Eoin Colfer's attempt to step into Douglas Adams' shoes And Another Thing …. Those who are not already familiar with Douglas Adams' The Hitchhiker's Guide to the Galaxy series, with its very British intellectual insanity, are not likely to understand nor appreciate this book and would be better served in starting from the beginning (when the Earth is blown to bits by the Vogans to make way for an interstellar highway). Hitchhiker fans are unlikely to go for this new entry either. It is not that Colfer is not capable of imitating Adams' particular manic writing style and his random storylines; Colfer can certainly effectively imitate Adams. The problem is one of Colfer being capable of resurrecting Adams in body, while ignoring the spirit. This may sound counter-initiative, but in a random absurdist story like Hitchhiker, character and plot matter all the more. However absurd Hitchhiker might become, we need to care about Arthur Dent and his travails. His relationships with Ford Prefect, Zaphod Beeblebrox, Marvin the depressed robot, and Trillian have to work on a very human level. The absurdity is not an excuse to ignore this; on the contrary, it makes it more important. If we have nothing else to hang on to that makes sense we need to be able to grab on to the characters. The other thing to consider is plot. Hitchhiker worked best when it had a plot, no matter how ridiculous, to guide the story. The reader needs to be heading to some recognizable destination whether it is finding the ultimate question (the answer to which is 42) or saving the universe from cricket playing assassin droids. Without a goal, the story descends into a random sequence of acid trip jottings. (Adams did claim to have conceived the whole idea for Hitchhiker while drunk.) In all fairness, not even Adams was capable of consistently living up to this standard.

There was one short sequence that I found worthwhile and worth sharing. The planet Nano, and its leader Hillman Hunter, decide they are in need of a deity. They, therefore, turn to consider none other than H. P. Lovecraft's Cthulhu. (Do not bother trying to figure out how to pronounce it. It is not designed to be pronounced by human lips.) For those of you not familiar with Lovecraft, he specialized in macabre short stories and novelettes mainly about humans using science and dark magic to cut through the thin veil of their earthly reality. At which point they look out into a universe bereft of any benevolent deity, but instead populated by monstrous "ancient ones" like Cthulhu, a prospect that generally drives the unfortunate humans into insanity.


A huge anthropoid was seated uncomfortably in the interview room's office chair, its grotesque, scaled torso squirming in the confines of the small seat. Tentacles dripped from its chin like fleeing slugs, and hard black eyes glittered from the depth of a pulpy face.
Hillman Hunter shuffled the pages of the creature's resume.
"So, Mr. Cthulhu, is it?"
Hmmm," said the creature.
"Good," said Hillman. "A bit of the ineffable, I like that in a deity." He winked conspiratorially. "Still, it wouldn't be much of an in-depth interview if we couldn't get a few facts out of you, eh, Mr. Cthulhu?"
Cthulhu shrugged and dreamed of days of wanton genocide.
…

"I see here you were in people's minds a lot a few centuries ago thanks to Lovecraft. Not much since then?"Cthulhu spoke in a voice of meat and metal. "Well, you know. Science and all that. Put a bit of a kibosh on the god business." Clear gel dripped from his tentacles as he spoke. "I kicked around Asia Minor for a while, trying to drum u a little fear. But people have penicillin now, even poor people have reading material. What do they want gods for?"
…

"Next question. Our last god was a less is more kinda guy. Sent his son down, but didn't show up too often himself. I think, and no disrespect to the man himself, that was probably a mistake. I honestly believe that he would put his hand up to that himself now if we could ask him. What I'm asking you, Mr. Cthulhu, is: Are you going to be a hands-on god or an absentee landlord?"Cthulhu was ready for that one; he had been practicing his answer for that very question with Hastur the Unspeakable only the previous night.
"Oh, hand-on, absolutely," he said, leaning forward to make clear eye contact as Hastur had advised. "The days of blind faith are over. People need to know who is blighting their crops or demanding virgin sacrifice. And now I am going to look away, but only because prolonged eye contact will drive you insane."
Hillman shook the sudden torpor from his head. "Good. Good. Quite a stare you have there, Mr. Cthulhu. Handy weapon to have in the arsenal."
Cthulhu accepted the compliment with a flap of one prodigious tentacle.
"Let's move one, shall we? Where do you stand on the whole Babel fish argument? Proof denies faith and so forth."
"My subjects will have proof and faith," rasped Cthulhu agitatedly. "I will bind them to slavery and trample the weak underfoot."
"I seem to have hit a nerve there," chuckled Hillman. "Again, I think you're on the right track; maybe you might want to pull back a little on the slavery and the trampling. We have quite a lot of weak people here, but they are big supporters of the church, whatever church we eventually pledge to. …"
"So. An old standard next. Presuming your application is successful, where do you see yourself in five years' time?"
Cthulhu brightened. Thank you, Hastur, he beamed into space.
"In five years, I will have razed this planet, eaten its young, and stacked your skulls high in my honor." He sat back satisfied. Succinct and informative, a textbook answer.
A spluttering cough blurted from Hillman's lips. "Skull stacking! Come on, Mr. Cthulhu. Really? Do you think that's what god do today? These are interstellar times we've got here. Space travel, time travel. What we need on Nano is what I like to call an Old Testament god. Strict, sure. Vengeful, fantastic. But indiscriminate eating of young? Those days are gone."
"Shows what you know," muttered Cthulhu, crossing his legs." 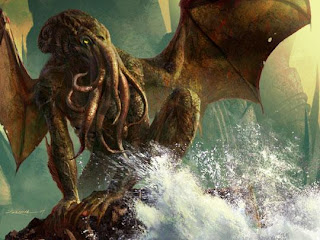