From Conservatism to Libertarianism: My Personal Journey (Part I)

While there can be left and right-libertarians, most libertarians lean conservative as exemplified by the Republican strategy, previously discussed. Libertarians pay a price for this as it boxes us in. This is particularly problematic in a two-party system like the United States where the Libertarian Party has proven itself unable to get passed the Republican charge that they only serve to throw elections to the Democrats. The reverse side of this argument is that liberals charge us with being crypto-conservatives, attempting to smuggle in conservatism, Trojan Horse style, in a way that might sound acceptable to a liberal audience. For example, this idea is at the core of Nancy MacLean’s attempt to connect James Buchanan and the Koch brothers to segregationists.

Before we can consider solutions to get us out of this political box, it is important to understand why most libertarians lean conservative. I suspect that many libertarians started off as conservatives, who then turned to libertarianism less because they stopped believing in conservatism but because they came to the recognition that, in the normal course of events, conservatism was unlikely to win culturally and, without that, all political victories would prove short-term and ultimately hollow. I certainly fit into this category and I am curious as to how common my experience is. Granted that some of the particulars are going to be more relevant to American Orthodox Jews growing up in the 1990s and coming of age with 9/11. Note that what I am about to say is my attempt to describe my political beliefs as a teenager and not what I currently believe. If you have not changed your mind about a few things since you were a teenager then I suggest that you have not been thinking very hard.

As with most Orthodox Jews, my politics was heavily influenced by events in Israel. For me, this meant a growing anger as Oslo failed, oddly enough, less against the Arabs but against the left as a whole. Liberals like Bill Clinton and Yitzhak Rabin had deliberately betrayed us, getting people killed, in order so that they could claim a moral high ground for themselves as “peacemakers” while denigrating those of us who actually cared about human life as racists and haters. I am ashamed to admit it, but my twelve-year old self was actually happy when he heard that Rabin was assassinated. (I was at Shalos Seudos at Keser Torah in Pittsburgh at the time.) I thought the man got what he deserved.

The other issue I cared about as an Orthodox kid was public schooling. Liberals made my parents pay for public schools designed to preach leftism as well as pay my religious schooling, leading to our financial struggles. Liberals did not really care about tolerating the non-rich who followed alternative lifestyles. On the contrary, they sought to bankrupt anyone who did not follow their line. These two issues primed me to be open to right-wing talk radio.

Ironically enough, you can blame Al Franken for my discovery of Rush Limbaugh. I read Franken’s Rush Limbaugh is a Big Fat Idiot and thought that he was being so over the top that I should find out about this Limbaugh person for myself so I read two of Limbaugh’s books, The Way Things Ought to Be and See I Told You So. This led me to occasionally listen to his show during lunch and on Fridays while preparing for Shabbos. I was never any kind of three hours a day listener but I found Limbaugh to be amusing in short doses.

Bryan Caplan argues that leftists are anti-market and rightists hate the left and this was certainly true of me. What attracted me to Limbaugh was not his advocacy of markets. In fact, at this point in my life, I was actually attracted to Marxism. Part of it was being able to stick the word “bourgeoise” into every conversation but there was also this sense of being part of a revolution. Granted, my version of the workers of the world overthrowing the bourgeois (don't you just love saying that word) capitalists tended to be more bottom-up with the party creating a counter-economic system rendering the seizure of government irrelevant. Also, my version of the party would be animated by the “social justice” side of the Old Testament. In fact, I used Isaiah 11:4 as my yearbook quote. 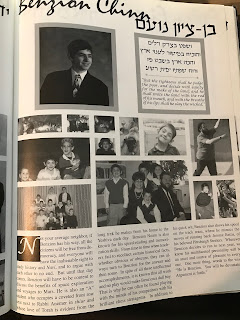 I cannot recall hearing from Limbaugh much in the way of any kind of principled defense of markets beyond saying that liberal plans for expanding government were bad. The closest he came to d’Anconia’s money speech was offering listeners a money clip to remind them that it is their money and they are allowed to keep it. The essence of the Limbaugh narrative was that we could stick it to those mean liberals (like Franken), who wanted to order us around and would hypocritically call us greedy bigots if we objected. What was critical here was a feeling that, by tuning in, one was taking part in an unfolding revolution. Limbaugh implicitly promised us that very soon the liberals, with their bankrupt ideology, would collapse and we would take back America.

It was through Rush Limbaugh that I discovered the person, who most influenced my conservative self, Sean Hannity. I first heard Hannity when he subbed for Limbaugh during the 2000 Republican primaries. (I remember this because I was a strong supporter of the late Sen. John McCain, who Hannity was quite critical of.) Once he got his own show, I took to listening to him on a regular basis. This may sound funny today but I will contend that Hannity, at that time, was a much more moderate figure than he is today. In fact, what attracted me to Hannity over Limbaugh was the relative lack of personal ego and hate. Limbaugh was all about himself taking on the liberal media. Hannity was about how we could join together to defeat the liberals and build a better America.

Into the mix of talk-radio, my high school self also encountered J. S. Mill’s On Liberty. Mill enchanted me with a dream of tolerance that people could be left to pursue their own good in their own way. For me, this had nothing to do with the left nor did it contradict my conservatism. It was the left who was trying to interfere with my life. One effect of Mill on my thinking was that by the time I was in college, even as I still identified as a conservative, I came to support the legalization of drugs and prostitution. Since these issues were so outside the political mainstream of either party, it had little effect on my larger political narrative. We conservatives were so going to succeed at spiritually reforming this country that we would not even need such petty laws anymore.
Posted by Izgad at 3:45 PM

I encountered JS Mills and Kant in college rather than high school, but as an economist who contrasted the thoughts of Machiavelli and Marx I came to different conclusions... :)

Overall, I'm mildly libertarian, but coming to it from the other side of the political spectrum. I have... different views on the role of government due to my academic background but ultimately believe that they should get out of the way whenever possible.

I was too young to grasp the significance of Rabin's assassination, but I've come to view the problem with the Oslo accords being one of the US engaging in foreign interference and Israel accepting the yoke of another country over self determinism, not necessarily as "leftist sacrifices" but as flawed, short-sighted people playing a difficult political game with a dishonest opponent.