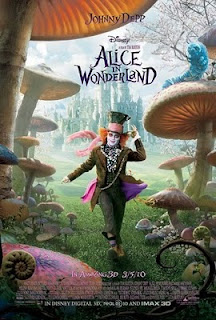 This afternoon I went on a belated birthday outing with my friend Lionel Spiegel to go see Alice in Wonderland. I should have been more cautious; the last time I went to the movies with him we ended up nearly laughing through Transformers wiping Israel off the map. (Since both of these were my choices, he should probably start questioning my judgment when it comes to going to movies in the future.) A number of loosely assorted observations related to the film.

We went to the Regal movie theater in downtown Silver Spring. The projector crashed right by the opening credits and had to be restarted. This resulted in the movie starting about forty minutes late. To the credit of the movie people, they offered everyone a free movie pass as an apology for the inconvenience. This is the second time I have watched a conventional movie in 3-D and so far I am not impressed. The glasses gave a shaded taint to the screen. Maybe this was a problem with how the film was shot, the theater's lighting or the glasses themselves, but I had a difficult time seeing the screen. I ended up watching a fair amount of the film without the glasses even though the screen obviously was blurry without them. The other problem with the glasses is that they are quite uncomfortable for anything more than a few minutes. When using them I found myself holding them up in front of my face instead of letting them sit on my nose. Maybe it would be a good idea if they produced opera style glasses for 3-D movies. The fact that I did not have a comfortable time may very well have influenced how I took in the actual content of the film.

The film is less an adaption of the Lewis Carroll novel as it is a sequel along the lines of the excellent Robin Williams Hook film, where a grown-up Peter Pan has to go back to Neverland to save his children from Captain Hook. Alice opens with a stereotypical display of stuffy narrow-minded hypocritical Victorians as a grown-up Alice is faced with the prospect of an arranged marriage with a nobleman, worthy of going for the Monty Python upper-class twit of the year award, in the hopes of saving her family fortune. Someone needs to give the writers a history lesson. In the nineteenth century, bankrupt aristocrats were marrying the offspring of traders and industrialists in the hopes of saving their family fortunes, not the other way around. (Tim Burton actually got this right in his earlier wonderful cartoon Corpse Bride, featuring two of the stars of this film. He even was courteous enough, in Corpse Bride, to allow for the existence of a loving arranged marriage.)

I had an idea, which Lionel thinks should be called the Chinn rule. Historical cultures should be given the same treatment as present-day ethnic groups in terms of protection from negative stereotypes. A film in which a young black woman struggles to overcome the violent brutish and ignorant black culture around her, where all the women are on welfare and on drugs and all the men are on drugs and in jail would be quickly tagged as racist. A film about a modern Arab girl that is only about her escaping a brutish culture of arranged marriages and honor killings would also be racist. (Such depictions of Arabs are still the norm, but that is a separate story. On this topic I must say that either this season of 24 is even more horrible in its treatment of Muslims than usual or I am becoming more "tolerant," God help me.) It was okay for Charles Dickens to use comical stereotypes for the nineteenth century. He was part of that time period. This is like blacks and the N-word. Blacks are allowed to use it; if you are not black you have no business saying that word.

Let us be honest, people use negative stereotypes of past cultures for the same disgusting and immoral reason as they go after present day cultures; putting other people down makes people feel better about themselves. Watching stupid intolerant Victorians make fools of themselves makes me, living in the comfort of the twenty-first century, feel intelligent and, more importantly, really tolerant just like being able to cluck my tongue at illiterate black criminals makes me, as a white person, feel civilized and sophisticated. The hypocrisy of prejudicially being able to tag others as intolerant is just sickening. At least blacks are still alive and can knock the living day lights out of bigots (not that I encourage violence) like they deserve. The Victorians, aside from sending the ghosts of Christmas past, present and future, have no one, but historians like me to defend them.

"A film in which a young black woman struggles to overcome the violent brutish and ignorant black culture around her, where all the women are on welfare and on drugs and all the men are on drugs and in jail would be quickly tagged as racist. A film about a modern Arab girl that is only about her escaping a brutish culture of arranged marriages and honor killings would also be racist."

Just because a movie wins an Oscar, does not mean it escapes being criticized for being racist. The one-dimensional portrayal of many groups in film is an ongoing point of pretension.

Back to the blog entry...

I love the last two paragraphs!

" On this topic I must say that either this season of 24 is even more horrible in its treatment of Muslims than usual or I am becoming more "tolerant," God help me.) "

-Their depictions of the Russians are even more disturbing. A Russian mafioso brings nuclear warheads to the US in order to sell them to the Arabs. Of course, these Russians are supposed to be too stupid to realize that the shortest way between Russia and the Middle East does not lie through the US.

I was thinking that as well. Maybe the rods were stolen from Vladivostok, brought across the Pacific through the Panama Canal and the IRK is not somewhere around Iran, but near Morocco and the Russians were trying to fool everyone by going a circuitous route and stopping in New York. I do not think that even this works. :p