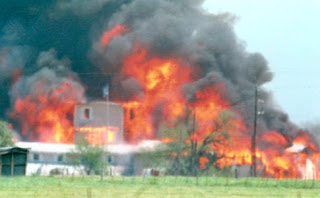 In the introduction to Messianic Revolution, David Katz and Richard Popkin explain that they were inspired to write the book from witnessing the Waco fiasco and how government negotiators did not understand apocalyptic reasoning even to the extent of failing to understand how the book of Isaiah might be relevant to the situation. One of the negotiators even thought that the "Seven Seals" were animals:

We know now that this failure to attend to the precise meaning of Koresh's references, compounded with the failure to understand the background of a group like the Branch Davidians, created very serious breaks in the chain of reasoning that might have led to an informed decision. The psychologists who advised the FBI concluded that Koresh was paranoid and that there was no point in trying to negotiate with him; the authorities eventually adopted a strategy of "stress escalation" that involved not only cutting off electricity to and training floodlights on the compound's buildings but also the use of other tactics including playing tapes of loud music, Tibetan chants, pleas from family members, and the sounds of animals being killed. Doomsday and death were part of the Branch Davidians' messianic plan, and when they died in the fire at Waco, they believed they were merely playing their parts in a divine script which they clearly understood.

Our sense was that we had seen this all before. On one level, the events at Waco reminded us of another siege by the forces of order, four and a half centuries earlier, at Munster in northern Germany. There, too, a group of religious radicals set up what they considered a divine community of Anabaptists behind a protective wall and held off the authorities for sixteen months, until June 25, 1535, when the gates of Munster mysteriously opened from within, allowing the capture of the Prince-Bishop Franz von Waldeck, who massacred nearly everyone inside. But even more importantly, we believe that much o modern religious radicalism can clearly be traced to earlier groups and their theologies, that it is impossible to understand sects like the Branch Davidians without this historical perspective. (pg. xi)

My mother can rest assured; there is something useful to do with the study of medieval and early modern apocalyptic movements (besides for going into the business for myself, bad health plan and all). I can go to work for the government (assuming I survive the background and sock drawer checks) as an expert in radical religious apocalyptic movements. I think that there is message in my work. Apocalyptics, even those sitting in caves, do inhabit the same physical word that we do and are part of the same political dynamics. (This becomes painfully obvious when apocalyptic visions crash planes into building and attempt to manufacture nuclear weapons.) It is important that we treat them as such.
Posted by Izgad at 8:27 PM