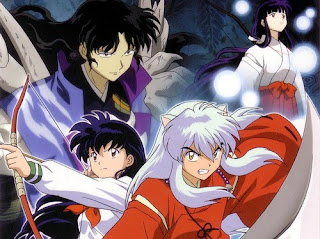 Recently I have gotten into the Japanese anime show InuYasha and have been watching it on Hulu. It is about a school girl named Kagome, who is transported, Lion, Witch and the Wardrobe style, to medieval Japan, which functions as a Narnia fantasy world complete with all manner of magical creatures. She has to team up with a half-demon warrior named InuYasha to recover the fragments of a sacred pearl. These serve as lots of little rings of power. Along the way, they gain for allies Shippo, a cute half-fox kid, Miroku, a sleazy monk and Sango, a demon hunter wielding a giant boomerang and a giant flying kitty. They take on a host of villains such as InuYasha’s older brother, Sesshomaru, the resurrected priestess Kikyo, who broke InuYasha’s heart and left him skewered against a tree for fifty years, and the ultimate villain, Naraku, who is less interested in killing our heroes as using them to further corrupt the pearl. I think of Naraku as a less sophisticated version of Lord Foul from the Chronicles of Thomas Covenant the Unbeliever. The plot that you see it really bait to fall into the real plot, which is usually more interesting than simply kill the good guys.

The person who recommended InuYasha to me also happens to be a fierce opponent of Twilight, who finds Bella to be too passive and Edward to be down right abusive. I find this strange because I find myself liking InuYasha precisely for the same reasons why I liked Twilight. For me, the main draw of Twilight was normal girl Bella being thrown into this horror fantasy situation of having vampires and werewolves as the chief men in her life. Bella is never fazed by anything and insists on playing the comic straight as she applies her normal person logic to her supernatural life, taking everything to its logical absurdity. The fact that Bella has an incredible level of control over Edward and Jacob, despite not being "powerful" in any conventional sense is itself a form of fantasy wish fulfillment empowerment. Similarly, Kagome applies her school girl logic and concerns about homework and tests as she runs around her fantasy medieval Japan with her puppy-eared half demon in tow, while going questing after magical objects. She has her perfect magic boyfriend to have go fetch and literally say "sit" to. InuYasha, like Edward, might be verbally abusive, but it is in a sulking charming schoolboy sense and made up for by romantic daring and witty back and forth dialogue.

Like Stephenie Meyer, but working long before she came on the scene, Rumiko Takahashi seeks to overturn the action superhero genre and render it into something more likely to appeal to women. She does this in two ways. First, she places a female as the central protagonist and tells the story from her perspective. It is interesting to note that this does not mean that the female character has to be empowered. Both Kagome and Bella are fairly passive characters, though Kagome is less so, surrounded and protected by more powerful men. Just as with historical narrative, the mere fact that a female is granted narrative goes a long way to neutralizing misogyny. One can take the same patriarchal story, but simply by giving the female narrative you have made her an active figure and ultimately allowed her to gain a level of humanity. Second, InuYasha, like Twilight, takes the action genre and turns it into a tongue and cheek romance. What looks like a blood and violence story is revealed to be a love story as the monster is rendered with a hidden soulful side that yearns to love and be loved in return. Thus the "male" paradigm of power and violence is defeated by "female" charm, empowering not just the seemingly passive female protagonist, but the feminine as a whole.

Very cool. I wish I weren't into so many other things; because this seems like the type of anime I would like.

I love your take on twilight, and by extension, InuYasha, which I haven't yet seen. Thanks for providing an alternate to the anti-feminist reading of Twilight that is going around--I think your interpretation is how I initially read it as well.

oh man, i've been watching InuYasha for years now - albeit in a occasional and not-at-all creepy fan-boy way. I'm amazed at what all you dip your finger into.

I'm going to disagree with you that Edward and InuYasha are really comparable in their treatment of Bella and Kagome, respectively. Edward is worried for Bella, which he uses as a pretext to isolate her from her friends, prohibit her from leaving the house, and to otherwise control her. InuYasha worries for Kagome, so he tries to protect her, but he recognizes her as fundamentally important to recovering the Shikon jewel shards as a result of both her spiritual powers and archery abilities. In fact, the only time he forces her to go anyplace, it's at the very beginning of their acquaintance, and due to his being still shaken about Kikyo. To the extent that Kagome's spiritual abilities and goodness of heart are more significant than her combat skills, this is because Kagome and InuYasha have complementary abilities. Bella has no special abilities; she's also kind of stuck up. Edward is abusive; InuYasha is merely rude.

Sparkly has much more of an excuse for when he pushes Bella away. She is not particularly necessary for anything so he does not have an excuse to be with her in the first place. Also in his case the danger is precisely from him. Puppy ears keeps up the pretense that Kagome is just an annoyance for much longer. His most prominent feature is his rude sullen tantrum throwing child act. (It is something about anime storytelling that allows this to even work in the first place.)